Sudarshan Acharya (28 January, 1939 – 01 December, 2022) was born in Jarada in the Ganjam district to Jatiraj and Rukmini. His learning started with Sanskrit at home. His formal education took him to Nuapada High School, Khalikote College and Ravenshaw College ending with a post-graduate degree. He took up teaching positions first at Srikakulam in Andhra Pradesh and then at Khalikot College and Brahmapur University. He retired from the University in 1999 after a long career in Odia Literature. His work involved the collection of many rare manuscripts and printed literature which he edited with insightful commentary. His compilation of the rare Indradhanu magazine shed much light on how the strong dispute between the supporters of Upendra Bhanja and Radhanath led to the dawn of modernity in Odia literature. 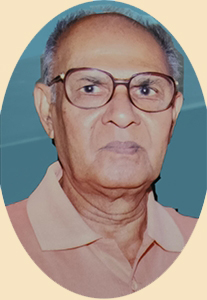 Prof. Acharya’s writing efforts started from his school days with some mystery stories and poems. This grew with time and he produced valuable works in the fields of criticism, editing and translation. His research work on ancient literature led to the publications with recovered text and commentary. Some of his notable contributions are: Chitralekha (2001), Upendra Bhanja’s first kavya, which he transcribed from palm leaf manuscripts. A few others are – Sribishnu Purana (2013), Srirama Rasayana (2015), Usha Abhilasha (2010), Rekha o Ranga (2015), Antapurara Abhilekha (2015), Padmanabha Narayana Deb Granthabali (1992) and rare early Odia magazines Indradhanu, Utkala Madhupa o Pradeepa. In addition to his deep knowledge of Odia language, he was proficient in Sanskrit, English and Telugu languages.

(Based on Sambad Sahityakosha entry)

Prof. Acharya had a fond association with Odia Bibhaba. From opening up his vast collection of important books, giving suggestions for new additions to just chatting about problems with contemporary literary scene, he was always available to us. This page is a small tribute to him in recognition of his contributions.

Digital versions of Sudarshan Acharya’s writings can be accessed via the table below which provides links for downloading these. Complete books in pdf format can be downloaded by clicking on the ‘download’ links.