This newspaper started from Baleswar in 1868 as ‘Bodhadayini and Baleswar Sambada Bahika’. After three years of publication it became a fortnightly from the earlier monthly and changed its name to ‘Baleswar Sambada Bahika’ only. Fakir Mohan was the first editor and Gobind Chandra Pattnaik, Jagan Mohan Pattnaik and others edited it later. In addition to carrying the current news it published articles on social and economic issues. Book reviews, discussions on language and textbooks, and other stimulating essays were also featured in it. 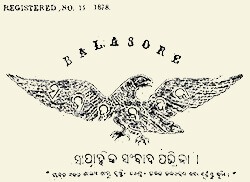 The table below gives links for downloading the available issues of the newspaper. Click on the links to download the files. Large files have been devided into parts of 25mb or smaller to facilitate downloading. Still it may take some time to download depending on the quality of internet connection.

Sample pages have been provided below to give an idea about the content and the quality of the digital version before downloading the larger files. These can be viewed in a new browser tab by clicking on the links.